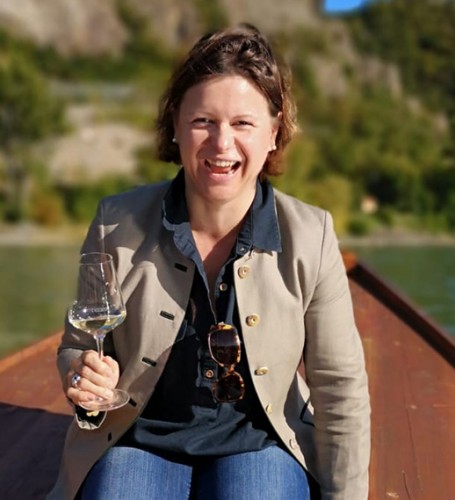 Katja grew up in the Wachau Valley in Austria and probably took her first sip of wine when she was very little. She also had the best grandmother in the world who sparked an interest in cooking in her. She and Katja’s grandfather set Katja on a path that would lead to NYC.

Katja’s family always had big gatherings and, ever since, one of her greatest joys is to host dinners for friends and family, cooking and baking for them. She loves to see people laughing and having deep conversations, and she loves watching strangers becoming friends by the end of the evening.

After attending culinary school in Austria, Katja almost exclusively worked at wine-focused restaurants, first in the Wachau, where she met many producers from Austria. Then in 2002, she started working at the Burg Vital Hotel in Oberlech, one of the most stunning 5-star hotels in the Alps, as Maitre d’ and Head Sommelier. This wonderful place truly shaped her career and taught her about hospitality, being a thoughtful host, and going the extra mile for her guests.

While she was at Burg Vital, Katja passed her Austrian Diplom Sommelier exam, one of the most important wine exams in Austria. It is just as difficult as the Advanced Exam with the Court of Master Sommeliers, which she passed in 2017. She is preparing now to pass the big exam, for Master Sommelier, one day.

In 2011, she felt NYC calling. Initially, she only wanted to stay for one year. Many moons later, she is still in love with this wonderful city. She was able to get an opportunity at Le Bernardin, which has been a 3-star Michelin and 4-stars New York Times institution since opening in 1986. She’s been lucky to get to work with Eric Ripert, Maguy Le Coze and the entire team of the restaurant.

Her mentor Aldo Sohm, who she now considers part of her family. has always encouraged her, pushed her, and motivated her in every way possible, and without him she would not be the person she is today. She is immensely proud to work alongside him as the Chef Sommelier with an amazing team of people.

Besides wine and food, she loves reading all kind of books, exercising, exploring new restaurants, travel, and spending as much time as possible with friends and family.

What did you find enlightening about PairCraft?

I love the idea of PairCraft! As a non-professional, you get a lot of useful insight into how to pair which wine with what you cooked at home. Most surprising was that the wines that we thought would be great with a dish didn’t work at all! It’s all about trying wines out and discovering and being able to open up 30+ or 40+ bottles and just going for it.