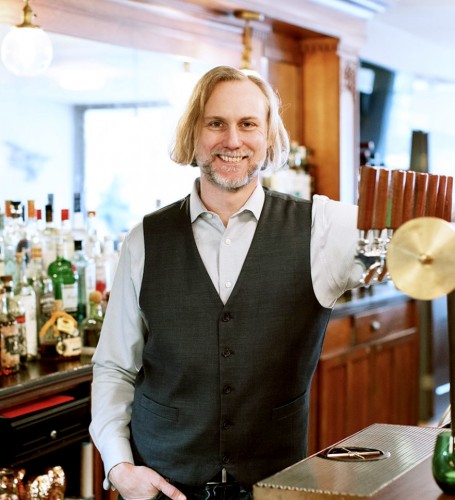 Jason Ferris has worked as a professional sommelier for 25 years. He has managed beverage programs and paired wines for the dishes of iconic culinary artists like Charlie Palmer at Aureole and Charlie Palmer Steak, Paul Liebrandt and Christopher Lee at Gilt, Terrence Brennan at Picholine, Iron Chef Masaharu Morimoto at Morimoto and the iconic Steakhouses Benjamin Prime in New York and Barclay Prime in Philadelphia.

Jason has traveled extensively in many of the world’s marquee wine regions, from France’s Burgundy, Alsace, Loire Valley, Rhone Valley, Champagne, and Bordeaux, to Italy’s Tuscany, Piedmont, Campania, Veneto, Alto Adige, Lombardy, Friuli, and Marches, to the regions of eastern Austria, and the Mediterranean coast of Spain.

Jason studied Hotel, Restaurant, and Institutional Management at Penn State University, passed the Court of Master Sommeliers Advanced Exam in 2005, was a National Finalist for the Chaine de Rotisseurs’s Best Young Sommelier Competition in 2006 and “Top Taster” winner for blind tasting in the New York City Food & Wine Festival in 2012.

Jason is currently the sommelier at The Park Inn in Hammondsport, New York, where he manages a 350-selection wine list for one of the premier farm-to-table destinations in the Finger Lakes Region. Their seasonally driven and locally sourced menu draws much of its fresh flavors from its own 10-acre sustainable farm on Keuka Lake’s west side. Opened in 1861 and meticulously restored in 2018, The Park Inn presents a 60-seat restaurant with a quaint wine bar, craft cocktails, and beers, all nestled beneath five classically appointed guest suites.

What is unique about PairCraft?

PairCraft’s approach to pairing is unique in that the wines are blind tasted with the dishes. The anonymous examination of the wines and the pairings in question helps eliminate a preconceived bias about a particular wine pairing. Only after a pairing is made does the taster know what the wine is ensuring the match is made only on its liquid merits.

There are lots of sommeliers out there, but for PairCraft, we enlisted the somms with the deepest expertise in pairing we could find. Jason Ferris’ reputation as a pairing expert is widely acknowledged in the world of sommeliers. About Jason, one sommelier said, “He runs circles around me when it comes to pairing.” Jason particularly likes digging into a challenge, and dispelling preconceived notions of what works in a pairing, which is why we gave him the complexity of dishes on the Thanksgiving table for which to find the truly perfect wines.